The coffee species Coffea arabica prefers light shade and has therefore traditionally been grown under a canopy of trees, which provides part-shade and filtered light. In recent years, researchers have shown that many of these “coffee forests” are high in biodiversity and provide a habitat for plants and animals that would not survive if the coffee forest wast turned into an open non-shaded monoculture field. Traditional shade-grown coffee cultivation is considered a type of agricultural permaculture.

In its wild form, Coffea arabica grows as a shrub or small tree in the forest understory, so it is naturally adapted to this type of conditions. The Coffea canephora grown to make Robusta coffee will, on the other hand, do best with more sun, and it can also tolerate higher temperatures. It is therefore often grown in open fields with no shade. 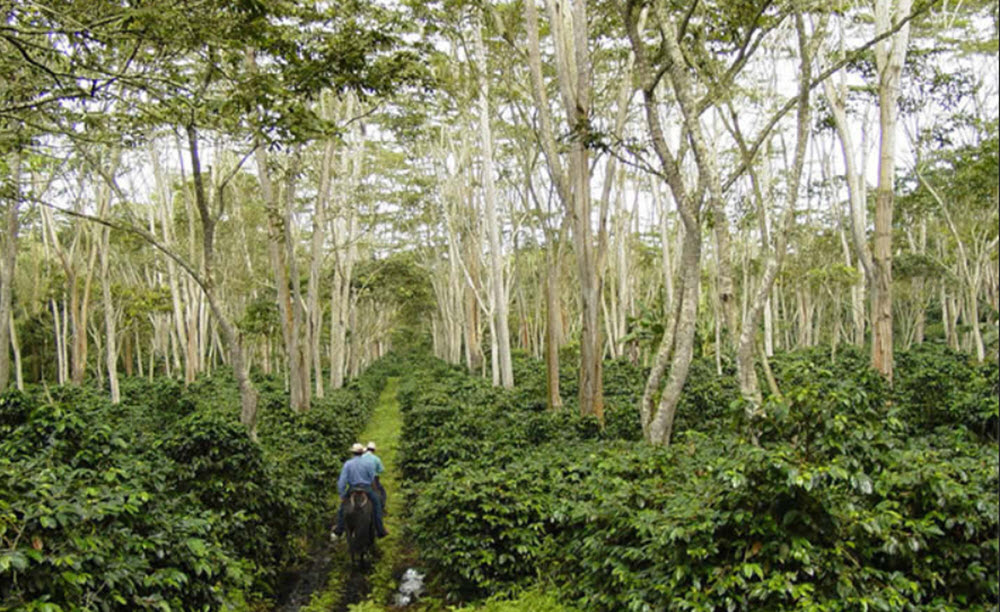 Since the 1970s, a bit more sun-tolerant and heat-tolerant species of C. arabica have been developed in an effort to reduce the impact of fungal disease, especially the dreaded coffee leaf rust caused by Hemileia vastratrix. While these new plants have helped boost coffee production, they have also made it tempting to convert coffee forests into open fields, thus destroying the coffee forest habitat. In the 21st century, there has been a renewed interest in preserving the coffee forests and many consumers have proved their willingness to pay a bit more for shade-grown coffee; especially in the speciality coffee niche where highlighting factors such as flavour, aroma, and environmental and social sustainability play a larger role than simply trying to compete by offering the lowest possible coffee price for the global mass markets.

The traditional rustic method of growing Coffea arabica involves planting coffee shrubs in existing forests. Some plants growing in the lowest strata of the forest will be removed to make place for the coffee, but the rest of the forest is left intact. The traditional system utilizes no or minimal use of pesticides or herbicides. It is not management-intensive.

Since it does not rely on purchasing pesticides and herbicides, nor on intense management, it is not a capital-intensive form of coffee production. Traditionally, it has been accessible even for small-scale farmers.

Rustic coffee forests tend to have a low yield per square meter.

Traditional polyculture involves planting not just coffee plants in the existing Forrest, but also certain other beneficial plants, such those yielding fruits, fuel or home remedies for health issues. This results in a higher diversification for the farmer, who becomes less reliant on one crop only. The additional plants can be grown for subsistence and/or be sold or traded.

The coffee yield per square meter is not high, but the additional yield from other plants can help to make the farming operation more economically successful.

Commercial polyculture is similar to traditional polyculture, but more plants are removed from the forest to make room for plants that yield a crop – both coffee plants and other plants. The removal of epiphytes is common, and so is pruning of the canopy. Fertilizers may be required to support the higher yields, and some commercial polyculture farms rely on pesticides.

The coffee yield is higher per square meter than for rustic-grown and traditional polyculture.

Some farmers keep coffee forest that exist in a sort of grey area between traditional and commercial polyculture, as they grow fairly large crops for the market but without significant management or heavy use of fertilizers/pesticides.

In a shade monoculture, the coffee is still shade-grown but the biodiversity of the area is lower than for the examples above. Typically, one or a few species of tree are utilized to provide shade, and extensive pruning is commonplace.

Shade monoculture farms tend to look organized, in the style of tree plantations. Trees can be planted in strict lines to make management and coffee harvesting more efficient. Pesticides are often used to keep unwanted plants away.

The coffee plants are normally planted densely in an effort to boost the yield per square meter, but this dense planting makes it easier for pests and diseases to spread quickly, which in turn makes the farmer more reliant on pesticides.