Currently, Coffea arabica makes up about 60% of the global coffee production, while most of the remaining production is Coffea canephora (robusta coffee).

The Arabica plant has a smaller crop yield than the Robusta plant, and is more susceptible to pests and disease.

Compared to the Robusta coffee bean, the Arabian coffee bean produces a beverage that is more acidic, less bitter and less caffeinated. An average Arabian bean contains 6-9% sugar, while the number for the average Robusta bean is 3-7%%.

Some coffee brands utilize a blend of ground Arabian and Robusta coffee to produce a balanced end product. 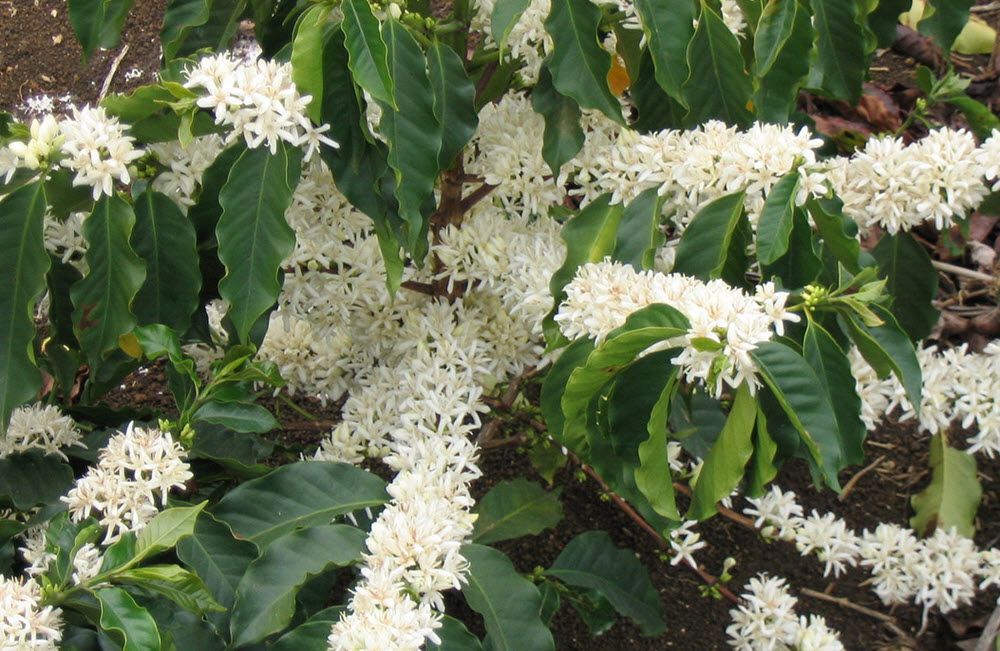 Left to their own devices, wild C. arabica plants tend to grow 9-12 meters tall and develop an open branching system. (Cultivated plants are usually kept much shorter and encouraged to grow in a more bushy fashion. There are also many cultivars that do not exceed 5 meters even without pruning.)

The leaves are 6-12 cm long, 4-8 cm wide, and grow opposite from each other. They are dark green and glossy, and the shape vary from elliptic-ovate to oblong.

The flowers are white and grow in axillary clusters, where each individual flower is just 10-15 mm in diameter. They emit a powerful sweet fragrance, similar to that of the jasmine flower.

The seeds develop inside a drupe, commonly known as the “coffee cherry”. The drupe is 10-15 mm in diamater and develops a bright red or purple colour as it matures. Each drupe contains two seeds, and these seeds are what we call coffee beans even though they are not actual beans.

Coffea arabica is the only known polyploid members of the genus Coffea. It carries four copies of the 11 chromosomes (total: 44). If it was a diploid species, it would instead carry just two copies of each chromosome.

The species Coffea arabica is believed to have been formed as a hybrid between Coffea canephora and Coffea eugenioides. Both these species are diploids, while Coffea arabica is an allotetraploid, with two copies of two different genomes.

Coffea arabica is believed to have originated in Ethiopia. Wild plants have also been encountered at South Sudan´s Boma Plateu.

We do not know if the Coffea arabica plants growing on Mount Marsabit in Kenya are truly wild or just naturalised.

Coffee plantations (including coffee forests) for C. arabica are typically placed at an elevation of 1300 – 1500 meters, but local variations need to be taken into account. Successful plantations do exist close to sea level as well as 2800 meters above.

The recommended average temperature is 15-24 degrees C. The plant can survive lower temperatures, but not frost.

A big difference between C. canephora (“robusta”) and C. arabica is that the latter one does best in light shade, while the former likes more sun.

Flowers will normally not appear until at least two years after planting, it is not unusual for it to take even longer.

Pruning is done for several reasons. Picking the drupes is easier from a short plant, and certain growth styles are prefered over others. Pruning can also be done to prevent the plant from producing too many drupes, since this can damage the health of the plant.

The drupes start out green and then gradually change colour as they mature, from green to yellow, then to light red, and then to a deep red or purple. They are not picked until they are red/purple and glossy. If they are picked too early or too late, the resulting coffee beverage will be of inferior quality. Not all drupes on a plant mature at the same time, and knowing how to select drupes and pick them at the perfect moment is an imortant skill at the coffee plantation.

C. arabica drupes are usually handpicked. An alternative method is to place mats under the plant and shake until drupes fall down, but the downside of this method is that unripe drupes will fall too.

On coffee plantations, a C. arabica is expected to produce from 0.5 kg to 5 kg of dried beans per harvest season. There are large individual variations, depending on factors such as cultivar, pruning and growth conditions.